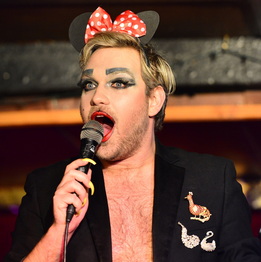 I’ve performed all over the UK hosting and singing at everything from burlesque shows to kids talent shows to in-store events to fetish nights.

As a singer, most recently, I performed a piece that was specially written for me as part of the SnapShot Songs Project for the Barbican Centre which was a song cycle reflecting the London zeitgeist featuring artists from a range of musical styles performing with a full 60-piece symphony orchestra and 60-person choir, the piece was performed over 2 nights at the Milton Court Concert Hall and is scheduled to be recorded.  I also was a soloist for a new setting of the Samuel Pepys diaries by composer Benjamin Till who created a 40-part motet that was performed and recorded in the church that Pepys is buried in, it was later broadcast on BBC Radio 2.  Most of my work is not this fancy.

I can also be heard on Marcus Reeves' anti-Putin protest single Russian Roulette (available on iTunes).  I was lucky enough to be a featured backing vocalist for the awesome Our Lady J as part of her Gospel of Dolly show at the Soho Theatre, as well as acting as part-backing vocalist, part-emcee for singer-songwriter Rebekah Delgado along with her band of guitar, violin, cello, harmonium, trumpet and saw, we've played (venues I can remember): 100 Club,12 Bar Club, Spice Of Life and Boom Boom Club, as well as launching the album in a solo show at Bush Hall.  You can hear me channeling Noel Coward on Rebekah's debut album Don't Sleep. 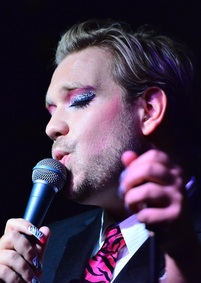 As a compere, I have run auctions, called bingo, told jokes, interviewed tap-dancing 4 years olds, run competitions, picked up nipple tassels and more, in every conceivable venue from underground toilets to concert halls.  I was the inaugural host for the London Cabaret Awards (Time Out: Best of 2012) and for the past seven years have hosted Cabaret Confidential which is currently resident at The Pheasantry, having previously been at Pizza On The Park and Leicester Square Theatre.  I’m also currently the regular host of the Young Performers Talent Show at West End theatres Her Majesty’s and Shaftesbury Theatre. Previously, I hosted Set ‘Em Up Joes at Soho Revue Bar (Time Out Critics Choice) and then CellarDoor.

Since 2002, I’ve been a regular cast member of the cult hit Battersea Barge Panto (Time Out Critics Choice Six Years in a row) as well as performing on stage at the Latitude Festival and performed live on Resonance FM.

What The Papers Said...

“...hosted by Jamie Anderson who did a sparkling job, constantly entertaining without even catching a breath” Deep-London Magazine


"Anderson expertly guides through the evening in a charming and spontaneous way." The Upworthy

“...hosted by the quite delicious Jamie Anderson” Broadway Baby

“Jamie Anderson sauntered through with style and professional ease” The Stage